The Breeders’ Cup is in a few days, and soon I will see one of my favorite horses race for the last time. I first heard of Mind Your Biscuits when I was at the Winner’s Circle OTB in 2016, a month before the Derby. As usual, I was at the bar watching Aqueduct before I report to work. That was when I paged through the Daily Racing Form and saw the entries for a Maiden Special Weight race. 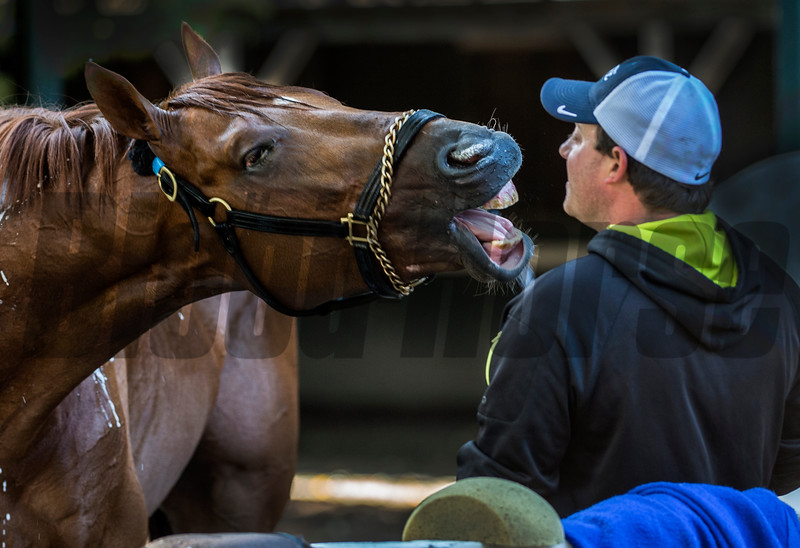 “Mind Your Biscuits”. I thought it was a very cute name for a horse. And as some Autistics are, I enjoyed the sound and arrangement of these letters. B-I-S (Latin: “twice”) C-U-I-T (from Latin: coquere, “to cook”). From the Old French word bescuit, so named because back in Ye Olde Days, biscuits were made in a two-step cooking process. First baked, than baked again to keep longer. Later, I found out that the horse’s name came from a Country music song.

“Hey! Look at that name!” I said to the bartender. “Very catchy and so cute.”

He won that day, and I followed him on that name alone. I wanted MYB to win and succeed so that he can have a long and happy life after his career is over. And over time, he began to be on the board. I was thrilled to see him made it to the Breeders’ Cup Sprint.

“But I think he’d do something real special.”

And he made it to the board, and then got 2nd due to a DQ. Then, the Dubai Golden Shaheen. I read that during training, Biscuits would have rap music from the 1990s piped into his earbuds. So when he won, the bartender and I cranked up Wu-Tang Clan’s “Triumph” and shout out “BISSSSCCCUITSSSS!!! BISSSSCCCUITSSSS!!!” whilst dancing.

A few weeks later, I saw that the connections donated a Breeders’ Cup hat with his name. I could easily get an Arrogate cap or a California Chrome cap for cheaper, but the only ones who have official MYB caps were the connections themselves. So I paid 60 bux for it and I wear it proudly. I shall wear it this Saturday.

And after all this time, I’ve seen changes in my life, yet I can count on MYB to do his best. He won the Golden Shaheen the second time, and got second at the Met Mile. When I heard that Biscuits will enter stud duty to Japan, my heart sank. I was hoping to see him here and take a picture of him, and most of all, kiss him with love and gratitude. At this year’s Equestricon, I met his connections and wished them the best. I also told the breeder to take good care of Biscuits as he is a great talented horse. His career kept me happy and eager to follow various stakes throughout the year. And now, he’s retiring, outearning Funny Cide as the top New York-bred horse. Racing won’t be the same without him. I hope I can find another horse with a cute name to follow. Chances are, he’d had huge hoofs to fill.

And I am hoping that one day, I will visit Japan and see Biscuits in person. From what I heard, MYB will strengthen the gene pool of Japan-bred horses. Most of all, I hope he’d be healthy and pensioned to Kentucky so I can kiss him. Thank you, dear Biscuits, for the ride. May you have a long happy life ahead. I will cheer for your progeny, especially if he comes to America and race at the Derby.

For Pretty Pretty Princesses of All Ages